As a student, having an extra $1600 dollars to use on hockey cards is a dream come true. Of course, what are the chances that will ever happen? Not likely, but let's see what happens if it did.

One thing I want to buy is packs. Loads of them. Buying singles is really not the same as crinkling open a pack and looking inside to see what you just got.

So, without further ado...

That's like $65 a box. I get to open 360 packs of one of my favourite sets, with the chance of getting some nice Fucale PC additions, and I can sell the hits I don't want to buy more off the 'bay! And expecially with my 2-pack H&P breaks from this year, I'm hoping that will continue! :)

Nope... just the Fucale is included. Yes, I MAY have overpaid here, but the patch of now one (if not the) main PC guy for me is awesome. I want to focus on my Fucale PC now mostly, so if anyone has a card of him FT please let me know!

This guy is one of my favourite baseball players, and has been called, "Miggy's twin" (Miguel Cabrera) Before he turns into a star, I'm gonna nab this card for my PC. Sweet!

I think it was because of the grading that got the card a price like this. If it was 9.5/10, I think it could get a $300+ price tag. A sick autographed card of the great one is awesome any day of the week!
2006-07 Ultimate Signatures BGS 8.5 Sidney Crosby - $80 shipped BIN, $1600 total
What's Wayne without Sid? Also, I have a Malkin auto... now I got Sid! Last pickup will be to the current, "great one". No brainer to finish off the $1600.
Thanks to Casey at Drop the Gloves! Hopefully this will inspire to start your own blog! Cheers!
Posted by BTHCCGeno71 at 13:04 2 comments:

Email ThisBlogThis!Share to TwitterShare to FacebookShare to Pinterest
Labels: Contest

Sorry it has taken so long for a post. School has recently been very busy and it's tough to sneak a post in with a bunch of projects needing to be completed. PLUS I also had to deal with getting my extremely messy room organized for new furniture, basically emptying it out.

But anyways, mail has been slow for me the past couple of weeks. I had a FedEx truck drop off a new backboard from Spalding this morning as a replacement for a smashed one (Prob. just defected) so I'll be glad not having to try and swish every shot now. ;)

Anyways, I did get a TTM back today, it was one of many I sent out within the past 2-3 months.

This one is from Morgan Rielly, who I consider to be the Leaf's #1 prospect. I sent it to the Marlies right after his Moose Jaw season ended, and am glad it got to him, as I sent it before he was assigned to the team. 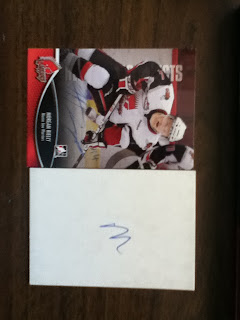 Recieved: 1 1/2 / 2
This may be the first - and only - time I classify getting HALF an autograph. As you can see, Mr. Rielly signed the card in a pen (musta ran out at the beginning because he went over it a few times) and added his Marlies #44. And, for some reason he signed the "M" on the decoy but did not seem to finish his autograph? First off, him using a pen is kind of strange - my stereotype is only retired players used pens for TTM's. Him adding his brand new #44 instead of Moose Jaw #4 (as on card) was also... different.


But anyhow, a TTM IS a TTM. And of a top prospect... I'll take that any day of the week. Thanks Mr. Rielly!

ALSO: Yesterday I saw the movie 42. It is a very inspiring movie, very worthwhile. If you get the chance to see it, are bored a night and maybe have a few dollars to spare, definetely see it. It is a movie you can not NOT enjoy as a sports fan. Kudos.
Posted by BTHCCGeno71 at 12:38 No comments:

CAN ANYONE HELP ME WITH MY MAJOR PCs?

Really want to get some new cards of these guys.

My PC Players: (In order of importance)

I was greeted with an exciting mail day today. I had recieved 2 packages in the mail - one from Dave from Wax Stain Rookie, and another from Matt from Cardboard Conundrum. Both contained great cards... so let's get to the goods!

The deal was originally 2 for 2 (Hit for hit and NHCD for NHCD) But Dave threw in 2 extras! Thanks Dave! 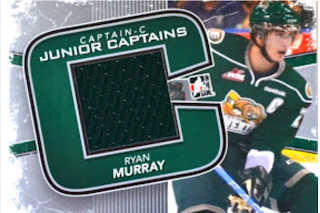 \
That's a SWEET card of one of my PC players, Ryan Murray. If it were not for his injury and the lock out, he'd be in the NHL right now, ranked as the most NHL-ready player in the 2012 draft. I expressed interest in it ever since Dave pulled it, I'm really glad we finally could work something out!
I also was to recieve a NHCD card of Casey Cizikas to complete my second set. Not only did I get that, but I got a Boone Jenner H&P base and a Evgeni Malkin Victory Stars of the Game Insert.
Thanks for the GREAT trade Dave!
TRADE WITH CARDBOARD CONUNDRUM:
My second career trade with Matt was another HUGE one. This one even better than the first, though.
Shoot... scans not uploading. Sorry everyone... I guess I'll have to just name the cards.
2010-11 Donruss Magicians Jersey Chris Paul /299
2012 Crown Royale Sunday Soldiers Jersey Sam Bradford /99
2011 Plates and Patches Jersey Eli Manning /199
2010 Threads Rookie Collection Prime Jersey Mike Williams /50 (Ooops... though he was Mike Wallace)
2012 Topps Golden Moments Jersey Joey Votto
2012 Topps Tier One Auto Adam Lind /399
2012 Gypsy Queen Bat Madison Bumgarner (Pitcher's bat? BUNT!)
2012 Gypsy Queen Auto Jordan Zimmerman
2011 Gypsy Queen Jersey Prince Fielder
2009 UD Signature Stars Top Prospects Auto David Price
2011-12 Luxury Suite Jersey/Stick Jason Spezza
2012-13 Artifacts AutoFacts Evgeni Nabokov
2011-12 Between The Pipes Future Stars Auto Matheiu Corbeil
2011-12 Limited Brothers In Arms Jersey Nikolai Khabibulin/Devan Dubnyk
WOW! Now THATS an amazing lot of cards! Huge additions to my PC! Now I can see why it costed Matt so much to ship. Thanks Matt! 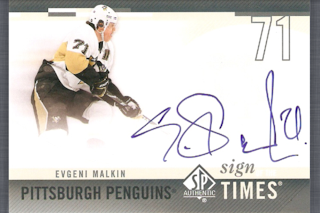 As Victor Martinez said on the Detroit Tiger's commercial, "I follow Prince, Miggy, Austin, Torii in the lineup..." "BOOM!"
That's right, An awesome finish to an awesome trade. My first Geno auto. Thanks so much Matt and Dave!
Posted by BTHCCGeno71 at 14:10 No comments:

BTHCCGeno71
My name is Kyle, and I am a student who has been a huge Evgeni Malkin and Pittsburgh Penguins fan for the last few years. Collecting for Kicks inspired me to do this, and I hope you all enjoy!

I love hearing from my readers. Email me at beware_the_hockey_card_closet@hotmail.ca for just about anything, to show off a nice card, request a trade, just to chat some hockey, or to tell me how much you love this blog! Hope to hear from you!

You are this blog's (The # under) Viewer!

What I read - and Enjoy